There’s the saying that “justice is blind,” but when it comes to the u.s. supreme court throughout history, the saying that best applies in many cases is “justice turns a blind eye.” See this article in the Atlantic.

The justices did not resurrect Dred Scott v. Sandford’s antebellum declaration that a black man had no rights that a white man was bound to respect. Rather, they carefully framed their arguments in terms of limited government and individual liberty, writing opinion after opinion that allowed the white South to create an oppressive society in which black Americans had almost no rights at all. Their commitment to freedom in the abstract, and only in the abstract, allowed a brutal despotism to take root in Southern soil.

The conservative majority on the Supreme Court today is similarly blinded by a commitment to liberty in theory that ignores the reality of how Americans’ lives are actually lived. Like the Supreme Court of that era, the conservatives on the Court today are opposed to discrimination in principle, and indifferent to it in practice. Chief Justice John Roberts’s June 2018 ruling to uphold President Donald Trump’s travel ban targeting a list of majority-Muslim countries, despite the voluminous evidence that it had been conceived in animus, showed that the muddled doctrines of the post-Reconstruction period retain a stubborn appeal.

Are there cities that you just can’t stand? Cities that for no easily justifiable reason suck the life out of you? I remember meeting a Londoner in St. Petersburg once (and I’m not talking about either London or St. Petersburg in this regard – just relating what this man had to say) who told me he hated Los Angeles – it had no soul. Being from Los Angeles, I felt I had to explain. I said, L.A. is such a huge metropolis with so many different communities and vibes – weren’t there perhaps some areas he liked better than others? No, he replied. He hated it all and couldn’t leave fast enough.

Now, I think I know how he must have felt. I feel the same way about Pasadena (California). At different points in my life I’ve lived in that city and worked in that city and nothing good has ever come of it. (Just recently, I had a job there and breathed an actual sigh of relief when I walked out on it.) If you have never visited Pasadena, let me give you a glimpse beyond the pomp and circumstance of the Rose Parade. As you drive in you’ll notice the sky becoming gun-metal gray due to the place it occupies in the San Gabriel Valley, much like a sewage drain. In other words, it does a good job of collecting the region’s smog and keeping it trapped for most of the year. Although there is a backdrop of looming mountains, mostly they appear as a strangely spectral border threatening to seal you in (think of the TV show The Dome). As you drive through, you’ll note a general grayness to the city itself, despite the admittedly pretty Craftsman-style houses. But it’s this very quaint and old-fashioned ambiance that I find oppressive. (And, yes, I realize there are shiny new districts with top-rated restaurants and the like but these appear to me like so much finery on a decaying corpse.) And then there is the glut of century-old high-spired churches – churches competing in grayness with the sky – churches on every corner. Yes, Pasadena is an old-fashioned and downright God-fearing city. Of course, if you like this sort of thing, stop reading here. But for me, I’m already feeling panicky just giving you a glimpse. I’m thinking of the experiences now, my personal experiences that, rightly or not, are forever embedded in the landscape. The people I’ve met, the people I’ve worked for (of course, I’ve met some great people, too), these people have mainly caused grief.

In short, there just seems to be something about the city and its people that are not conducive to my good health, mental or otherwise. Though the place may be God-fearing, it does damage to whatever I take to be my soul. So, I do understand perfectly now what that Londoner was feeling in regard to Los Angeles. Some places you’re simply better off just passing through.

I have often wondered, how does one trust that a charity is using its resources well? How does one know if the money donated is making a difference (even if just a little). Recently, I read an article in the Atlantic Monthly that discusses the “effective altruism” movement, whose chief concern is to find answers to these types of questions. I found this article quite enlightening – and very moving – as the author writes from a truly heartfelt point of view. 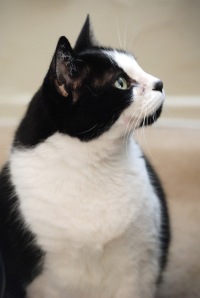 I always write about my dogs, but long before these two crazy beings came into my family’s life, we had only cats – two cats. Sadly, they both passed away within the last two years. Recently, I came across the piece below, written just after our last cat left us. Her death was especially hard to accept because even up to the end Bella was sweetness itself. She seemed grateful for everything, every morsel of food, every stroke of her fur, every moment on our laps, and even our ready response to her soft cries when, at the very end, she wanted us to carry her over to the litter box – she could barely move and yet still she refused to soil her bedding. At the time of her passing, I didn’t have the heart to share the piece below, but recently when I came across it in my files, it somehow made me feel glad that I made an attempt, at least, to acknowledge her existence in our lives. So here is my tribute, however brief, to Bella.

Our family is broken, like an old boat that lists to one side. We stay afloat, but we’re thrown off balance and feel dangerously close to falling into an ocean that looks darker and bleaker than ever before. To an objective observer, it may not seem like there’s a problem. And even if this observer happens to notice the flaw, it might appear easy enough to fix. But for us, there’s no fix. We just wait for the passage of time to ease us back into balance.

Bella died this week. That’s her picture above. I know that people who’ve never shared their homes with animals may not understand the pain of losing these bright creatures who are so much more than pets. But I also know there are others who, like us, have gazed at that dark ocean or that night sky and asked: “Where have they gone?” And to all who have, I hope you will wish Bella the paradise she deserves. I hope you will wish her long sessions of “catch the guitar string,” endless lush fields of green that she can dart about in when the mood strikes, a big house filled with bay windows and many other cats and plenty of sunlit spots for them to nap in…and all manner of wonderful pleasures. For Bella, our Bellarina, a beautiful soul in every way, deserved no less.

I don’t know about you, but I don’t have cable or Tivo, so I’m subjected to a stream – a flood – no, let’s be accurate – a tsunami of commercials whenever I watch what has been so lovingly and nostalgically called “antenna TV.” Believe me, I’m quick with the mute button and the on/off button, too, but I just can’t get over the sheer audacity that so much advertising is even allowed to enter my home, not to mention my psyche. My brother says, “Kill your TV.” I suppose he’s right. It’s my fault for even watching the thing, but still there are some shows that are a good source of pleasure and relaxation – until the thundering hooves of a thousand stampeding commercials take it all away.

I know full well that TV shows exist because of the revenue brought in by the commercials and all that, but shouldn’t there be some sort of regulation? If not governmental, then self-regulation? I guess certain commercials are no longer allowed for health reasons, like cigarette commercials. But then why in the world are drug commercials allowed, the ones that are 5 minutes long that promise to cure your specific ills, if the side effects don’t kill you in the process (and there’s always a stomach-churning long list of them, right?). It’s my understanding that these drug commercials came into being due to a law enacted during Bill Clinton’s term. Well, I guess this may be a case of “politics makes strange bedfellows” or something like that, but still here we are in the year 2014 and he has this as his legacy. Nice work, Mr. Clinton! I mean, we’re in the midst of a drug addiction epidemic, and we all know it’s not just illegal drugs. People are also abusing and killing themselves with perfectly legal drugs, and I don’t think these commercials are helping the matter any by their insidious claims and presence.

I think these drug commercials epitomize all that’s wrong with television advertising in the first place. They’re facile, they purport to have knowledge that often turns out to be untrue (note all the recalls and lawsuits when things go bad), and they make the assumption that we’re all dumb enough to believe that if we just buy, buy, buy our lives will be so much the better for it.

But do they have to say it so frickin’ obnoxiously? And so often? Like every 3 minutes into a show? Like with a non-stop barrage of 10 commercials in a row? Like when all is added up in time, as long as the evening news itself? Or the David Letterman show?

Anyway, you may not agree with me. You may say, throw that stupid old antenna out and stream shows on the web instead. Or get cable with a few choice channels. Or…

Or maybe I should kill my TV.